What is a gear? 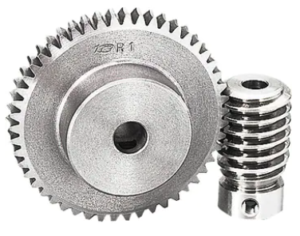 A gear mechanism is a mechanism that transmits rotational motion by meshing teeth on two cylindrical surfaces.
Since this mechanism can reliably transmit a large amount of power, it is used to speed up or slow down rotation, increase torque, and change the direction of rotation. Here, the module that represents the type and tooth size of this gear. We will explain the characteristics of the tooth profile curve and the involute waveform that keep the angular velocity ratio of the gear constant.
Through this explanation, I hope that you can understand the analysis method of the angular velocity ratio of various gear trains and the mechanism of reduction gears and differential gear devices. In addition, knowledge of gear mechanisms is essential for understanding the mechanisms related to the structure of automobiles and industrial machinery, as well as basic knowledge for their development, application of functions, overhaul and repair, so I definitely recommend learning. . 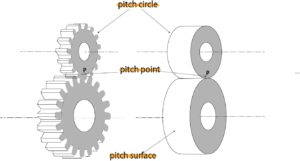 For example, friction wheels such as belt drives have advantages such as being quiet, smooth, simple in structure, and excellent in cost performance. The rotation speed ratio is inaccurate, and the friction surface is prone to wear and deterioration. If the contact force is increased to reduce the slippage, damage to the bearing and deformation of the friction surface will cause radius change. In order to solve these problems, gears are made by carving teeth on the friction surface of a friction wheel as shown in Fig. 1 so that rotation can be reliably transmitted by the meshing of the teeth.
The advantages and disadvantages of this gear are summarized below.

Name of each part of the gear

When a pair of gears are in mesh, the surface equivalent to the surface of a friction wheel that moves in the same way as the gears The surface seen from the front) is called the pitch surface.

When a pair of gears are in mesh, the gear circle corresponding to the outer circumference of the corresponding friction wheel is called the pitch circle.

When a pair of gears are in mesh, the point corresponding to the point of contact between the two friction wheels that move in the same way as the two gears (the gear teeth mesh point) is called a pitch point. 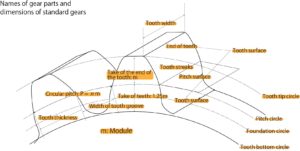 Figure 2-2: Names of parts of gears and dimensions of standard gears

Modules are used as references to represent tooth dimensions. If the pitch diameter is d (mm) and the number of teeth is z, the module m (mm) is defined as follows.

The value of the

module m is specified in the JIS standard. Generally used standard size teeth (full teeth) have the addendum height equal to the module, and the root height provides a gap (apex) between the tooth tip of the mating gear. It is stipulated that it should be 1.25m or more.
The effective tooth depth that contributes to tooth engagement is m on the addendum side and m on the root side, for a total of 2m.
In addition, the interval p between two adjacent teeth on the pitch circle is called the circular pitch, which is obtained by dividing the circumference of the pitch circle by the number of teeth.

In this way, the size and spacing of the teeth are all determined on the basis of the module.

Figure 2-3: Names of parts of gears and dimensions of standard gears

That is, the width of the tooth space is slightly larger than the tooth thickness.

In this way, the size, interval and shape of the teeth of the gear are determined based on the module m and the pressure angle α, and the gears with the same module and pressure angle are meshed.

The standard values ​​of modules and tooth sizes are shown below.

The many types of gears can be broadly classified into three types according to the relative positional relationship between the two gear shafts.

Cylindrical gears with teeth on the cylindrical surface are used as the paired gears of the parallel shaft gears.
The most common of these is the spur gear, in which the tooth trace is parallel to the axis of rotation. 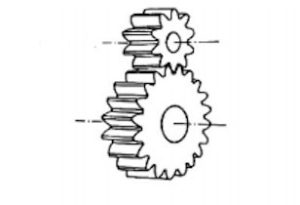 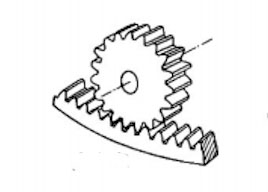 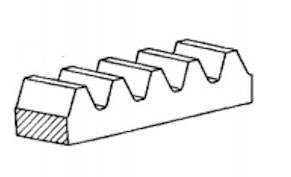 Gears that are machined so that the tooth trace is not parallel to the axis of rotation include helical gears and double helical gears.

Because helical gears and helical gears are stronger than spur gears, the transition from one tooth to the next is smoother, and vibration and noise are reduced, they are used for applications such as high-speed rotation often

A bevel gear with a cone angle of 90° is called a crown gear. 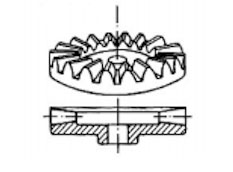 axes are neither intersecting nor parallel, they are called staggered axes.
When the two axes are at right angles, rotation can be transmitted by a worm shaped like a screw and a worm wheel that meshes with it. This combination is called a worm gear. 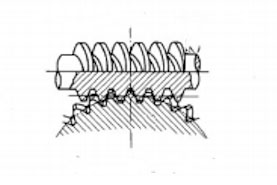 for gear tooth curve. There is a mechanism for smoothly transmitting rotation.

If you look at how one tooth of the gear meshes, you can understand that rotation is transmitted while sliding along the contact point tooth profile curve. Fig. 5 shows the velocity of gears A and B at the contact point

and sliding velocity of B relative to A

.
The sliding velocity is the common tangent at the contact point 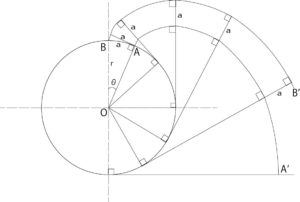 As shown in Figure 6, when a thread wound around a circle is unwound without slack, the trajectory drawn by the tip of the thread is called an involute curve, and the circle around which the thread is wound is called a base circle. .
Curves AA’ and BB’ in Fig. 6 are the trajectories of the tip points when the threads wound on the same base circle are unwound from A and B, respectively. The line of this locus is the involute curve.

has the following properties
For example, suppose the equation of an involute curve with a base circle of radius α shown in FIG. 7 is expressed in the following two ways. 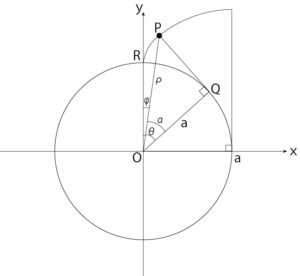 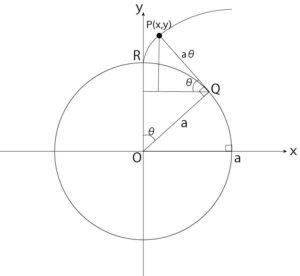 Figure 7-a: Coordinates (x, y) of point P are represented by a, θ

Since the length of line segment AB in \(\triangle{OQS}\) is,

can be expressed as 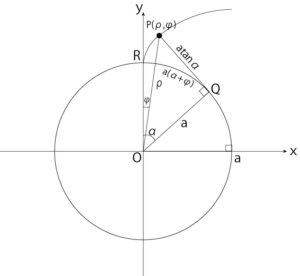 Figure 7-b: The polar coordinates (ρ, φ) of point P are represented by a, α 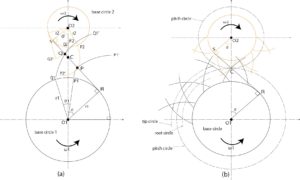 If two gears with involute tooth profiles are rotated while they are in contact, the angular velocity ratio will be constant. This can be confirmed as follows with reference to FIG.
At this time, involute curves \(P{_1}-P{_1′}\) and \(P{_2}-P{_2′}\) are rotated together with each base circle while touching , the curves coincide with \(Q{_1}-Q{_1′}\) and \(Q{_2}-Q{_2′}\), and the contact point is on the straight line RS from P to Q move to
If the rotation angle of each base circle is \(\theta{_1},\theta{_2}\), the following relationship holds.

Therefore, if a gear is made with a tooth profile curve that is part of an involute curve as shown in Fig. 8-b, it will continue to rotate with a constant angular velocity ratio.
Such gears are called involute gears.
In addition, if a circle with a radius of \(O{_1}C,O{_2}C\) is taken as a pitch circle, it can be seen that the following three transmissions are all the same. 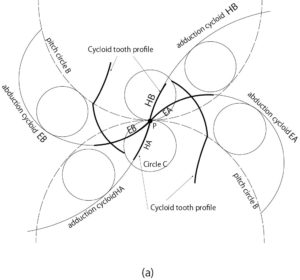 When another circle rolls on a circle or a straight line, the trajectory drawn by a point on the rolling circle is called a cycloid curve.
A cycloid is called an abductor cycloid when it rolls outside the circle, and an adductor cycloid when it rolls inside a circle.
As shown in Fig. 9-a, circles A and B are the pitch circles of gears A and B, respectively, and P is the contact point.
When a small circle C rolls from a point P along the pitch circles A and B, the abductor cycloids are EA and EB, and the adduction cycloids are HA and HB.
A gear with tip EA and root HA and a gear with tip EB and root HB are called cycloid gears. 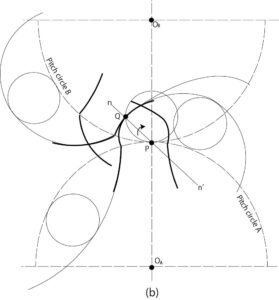 As shown in Fig. 9-b, when the two tooth profile curves are brought into contact at point Q and a normal line \(n-n’\) is drawn, the pitch circle will always contact Since the point P intersects the curve connecting the center \(O{_A}O{_B}\) of the circle, the angular velocity ratio is constant. The trajectory of the contact point is an arc\(\stackrel{\frown}{PQ}\).

https://katuhito.net
Note: If you want to browse the Popular Posts Japanese version of the article in English, click the article you want to see and then switch the language.