For example, when a rod with a cross-sectional area of ​​10 mm is pulled with a force of 100 N, the force (stress) per unit area generated in the rod at that time is calculated as follows.

The tensile load and compressive load acting on this rod are also called axial forces. 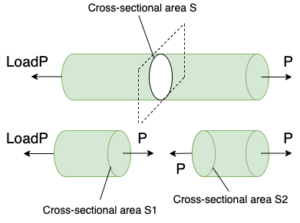 Assuming that the rod is cut at the portion of the cross section S, a load of the same magnitude P acts on the two cut surfaces S1 and S2, and the force balance is maintained even on the two left and right rods cut. Dripping. In other words, when considering the action of the internal force of the rod that receives the load in the opposite direction at both ends as shown in Fig. 2, the load P of the same magnitude is obtained no matter where the rod is cut so that the external force is transmitted. It can be seen that it acts as a force (internal force) acting inside the rod.

Here, since the unit of load is N (Newton) and the unit of cross-sectional area is ㎡, the unit of stress is N / ㎡, which is per unit area for any cross section on the surface of the object or inside the object. Can be defined as the force acting on. The stress acting in the direction perpendicular to the stress-acting surface is called normal stress. 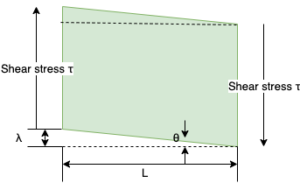 At this time, if the shear change amount λ is much smaller than L, the following relational expression holds between these lengths and angles θ.

From this equation, the shear strain can be regarded as the shear change amount λ expressed in an angle (rad = radian). This is because θ in Fig. 6 is the central angle, and L is regarded as the arc of the circle and the amount of λ changes.

Here, if the amount of change in λ is very small, from ① and ② in the above equation.

Because it can be considered.

The law that the elongation of an elastic object such as a spring and the load below the elastic limit are directly proportional (the law of elasticity).

k is a constant called a spring constant, which has a value peculiar to the spring and indicates the strength of the spring itself.